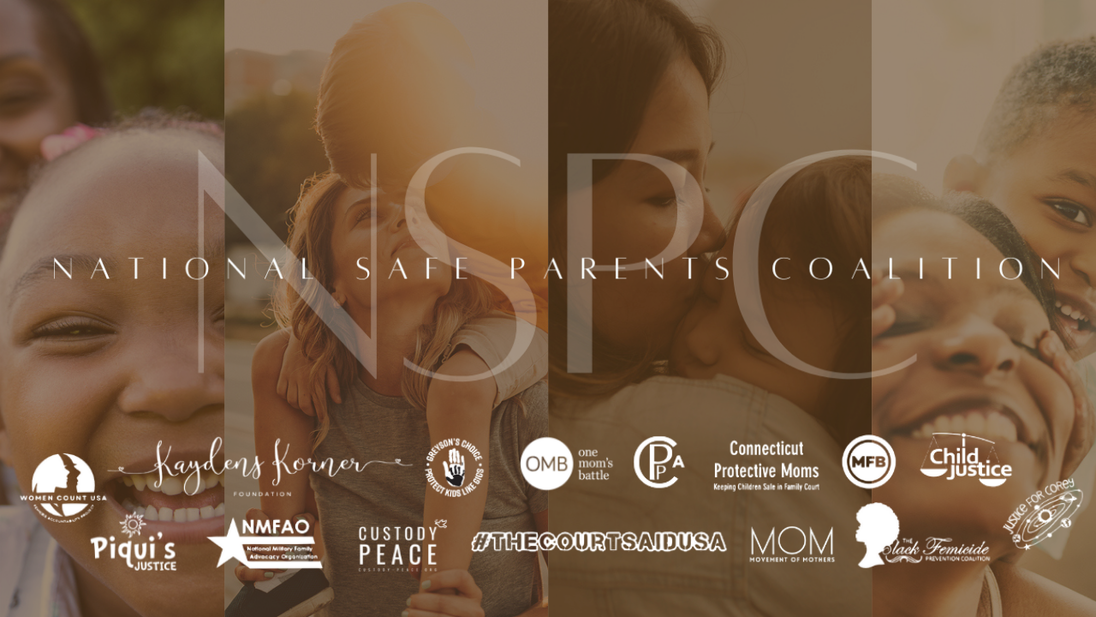 PRESS RELEASE. FOR IMMEDIATE DISTRIBUTION.
Washington D.C., Monday, February 7, 2022
Calling All Safe Parents!
National Safe Parents Coalition
Launches Campaign to Include Child Safety First
Kayden’s Law in VAWA (Violence Against Women Act).
Washington D.C., February 7, 2022– National Safe Parents Coalition (NSPC), a coalition of more than 100,000 safe parents and family court reform advocates across the U.S., launches its first national legislative action campaign to advocate for the inclusion of the child safety first provision “Kayden’s Law” in VAWA (Violence Against Women Act).  As VAWA talks are in the final days, it is crucial that the hundreds of thousands of domestic abuse advocates and victims are heard collectively to ensure children’s safety is prioritized and addressed during family court custody proceedings. “Kayden’s Law” in VAWA passed the U.S. House in 2021 and is now awaiting approval in the Senate.

The NSPC campaign focuses on the Keeping Children Safe From Family Violence Act or “Kayden’s Law,” a provision in VAWA aimed at making child safety the primary concern in custody disputes. For decades, safe parents across the nation have struggled to keep their children safe from a dangerous ex partner, while family courts frequently minimize risk concerns and the detrimental effects of family violence on children as victims or witnesses. Too often, court decisions have compounded harms to at-risk children, sometimes ending in preventable abuse and child murder by a dangerous parent. Coming together to raise awareness of this proposed federal law, more than 100,000 safe parents and concerned citizens hope to create a sea change in how family courts handle risk and abuse to children.

Actress, UN Special Envoy, and child rights advocate Angelina Jolie, in her recent address on the Violence Against Women Act on January 19, 2022, urged support for Kayden’s Law, saying: “Please contact your Senators and ask them to reauthorize the Violence Against Women Act (VAWA) with these new protections for the sake of families across our country ... for children like Kayden in Pennsylvania and Piqui in California.”

"Kayden's Law" is named after Kayden Mancuso, a 7-year-old girl from Bucks County, Pennsylvania who was murdered by her father during court-ordered unsupervised custody time, which was granted over the objections of her mother who had raised safety concerns in custody litigation. Kayden’s mother, Kathy Sherlock  submitted evidence to the court of the father’s abusive, violent history – including criminal records - but he was nevertheless granted unsupervised contact with Kayden by the court. The father then beat Kayden to death and tied a bag over her head, leaving a note of retribution on her body.

Unfortunately, Kayden's story is not unique and many children have been preventably killed like this by a dangerous parent who was awarded custody. It is estimated that each year in the U.S. tens of thousands of children are court-ordered into the custody of an abusive parent, frequently without supervision or other safeguards in place. Furthermore, throughout the U.S. and world, dangerous parents are using family court systems to harm children and former partners, continuing their post-separation abuse with little oversight or accountability. While these problems have been widely studied and documented, children continue to be sent into harm’s way.

Building on a state bill of the same name led by Pennslyvania Senators Santarsiero and Baker, U.S. Congressman Fitzpatrick authored “Kayden’s Law” in VAWA in consultation with the National Family Violence Law Center at GW (NFVLC), the only national organization specializing in the intersection of adult and child abuse in the family and its implications for state family courts.

“No child should ever be court ordered to be left alone with a dangerous abuser, period. Kayden’s Law in VAWA will help states to ensure that never happens again,” said Danielle Pollack, the policy manager for the National Family Violence Law Center at GW (NFVLC). “By adding Kayden’s Law to VAWA, for the first time since it was passed in 1994, states will be eligible for federal funding when they improve their state custody statutes and close loopholes which routinely jeopardize the safety of children,” she added.

In 2018, the founder and director of NFVLC, Professor Joan Meier, provided the technical assistance for House Congressional Resolution 72, which encourages state courts to improve custody adjudications where family violence is alleged, and laid the groundwork for “Kayden’s Law” in VAWA. Since 2018, several states invested in improving their family court systems have already begun this process in consultation with NFVLC, and many others may soon follow with the passage of “Kayden’s Law” in VAWA as it provides essential funding to the states ready to protect children.

“NSPC works with similar national organizations across the globe, all whom are contending with the same problems we see in the U.S.: Court’s resistance to taking risks and abuse to a child seriously in the context of child access decisions,” said spokesperson for Connecticut Protective Moms, a National Safe Parents Coalition member.

The National Safe Parents Coalition (NSPC) represents dozens of family court reform advocacy organizations and more than 100,000 survivor parents and concerned citizens in the United States advocating for evidence-based policies which put child safety and risks at the forefront of child custody decisions.

Highlights of Kayden’s Law in VAWA
The Keeping Children Safe From Family Violence Act or "Kayden’s Law" in VAWA, if adopted, will incentivize states to ensure that their child custody laws improve protections for at-risk children by:

1. Restricting expert testimony to only those who are appropriately qualified to provide it. Evidence from court-appointed or outside professionals regarding alleged abuse may be admitted only when the professional possesses demonstrated expertise and experience in working with victims of domestic violence or child abuse, including child sexual abuse.

2. Limiting the use of reunification camps and therapies which cannot be proven to be safe and effective. No “reunification treatment” may be ordered by the court without scientifically valid and generally accepted proof of the safety, effectiveness and therapeutic value of the particular treatment.

Please email us at media@nationalsafeparents.org