Urgent Request for the San Diego County Board of Supervisors & CAO:

Call-to-Action (By Monday, April 11, 2022):
​Contact the San Diego County Board of Supervisors and the Chief Administrative Office (CAO) and tell them they must add “Family Courts” to the areas of concern in San Diego CEDAW, specifically applying the CEDAW position on intimate partner violence against women in the determination of child custody, protections against gender-bias and all forms of Post-Separation Abuse including Vexatious Litigation/Litigation Abuse/Legal Abuse and all forms of Coercive Control throughout the San Diego Family Court system. 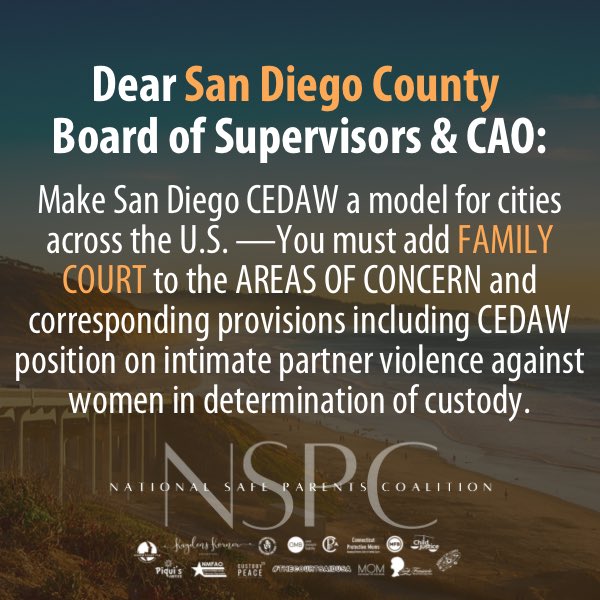 Instagram:
​Dear @countyofsandiego Board of Supervisors & CAO: Make #SanDiego #CEDAW a model for cities across California and the U.S. You must add FAMILY COURT to the AREAS OF CONCERN and corresponding provisions including CEDAW position on intimate partner violence against women in determination of custody. Detailed Recommendations and calls to action → www.nationalsafeparents.org

“#Genderbias against women in such contexts is prevalent as women subjected to intimate partner violence are at higher risk of negative custody-visitation outcomes." — @un #humanrights

​Specific Requests for the San Diego BOS and CAO:

The Platform members hold the view that abusive relationships between parents predominantly affect women and have direct impacts on the children’s life, yet violence against women is rarely considered as relevant factor by national authorities in child custody decisions. There is also no doubt that intimate partner violence predominantly affects women, and yet the correlation between domestic violence against women and child abuse is most often underestimated by practitioners and courts. Gender bias against women in such contexts is prevalent as women subjected to intimate partner violence are at higher risk of negative custody-visitation outcomes. Moreover, discriminatory gender bias often leads to mistrust women, in particular concerning presumed false allegations of child abuse and domestic violence.

​In this regard, the experts stressed that a holistic and coordinated approach based on the existing international and regional standards must be applied not only to uphold the principle of the best interest of the child but also the principle of equality between women and men. This approach is confirmed by jurisprudence of various international courts, UN treaty bodies and other relevant mechanisms.
READ FULL STATEMENT